Here is my project, inspired by Mexican Embroidery. 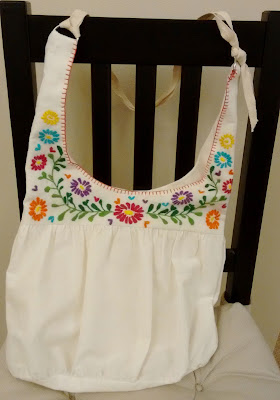 I was quite pleased with this. I created a pinterest board for reference, and then designed the bag and the embroidery myself, mostly by borrowing motifs from other designs. 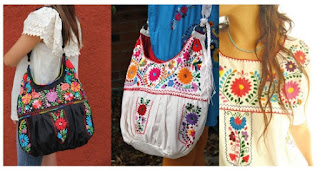 To be entirely honest, I'm not sure how Mexican inspired it really looks, although it is certainly very much a folk art effect. I may have held back a little too much! I have always enjoyed the constructive aspects of sewing more than the decorative, and I wanted to get the whole thing done in the time I had.

But even saying that, I surprised myself with this one. I was surprised at how quickly and easily I managed to get the embroidery completed (Only 2 days...). My hand stitching is better than I realised. And I've started another little embroidery piece as well.

Most of the work is stem stitch or satin stitch. The fabric is leftover muslin, and I am still looking for a strap I like!
Posted by Zoe at 21:13 1 comment:

Fashion on the Ration

Earlier this month I had to make a trip into London to renew my passport. So Jon and I made the most of it, and visited the Imperial War Museum. I was incredibly excited about this as they had an exhibition 'Fashion on the Ration', which I had been desperate to see. 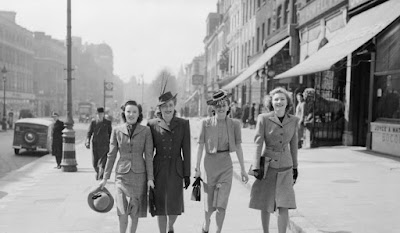 The exhibition looked at the impact of war rationing and austerity on people's everyday clothing.

For complete beginners, During World War 2, there were shortages of goods, including textiles in Great Britain, (not just Great Britain but the museum is in London). The government issued coupon books, and people could only buy new clothes if they had enough coupons to submit with payment at the point of purchase. This severely restricted the number of garments people could buy. 'Make do and Mend' came about as a slogan during this time. There were rules about the features that new garments could have as well  - limiting the number of buttons and prohibiting turn ups on trousers in an effort to reduce the amount of materials used. The number of pleats in skirts were restricted, as were the number of pockets on shirts. Dressmaking patterns were stamped according to whether the styles conformed to regulation or not.

In addition to that, there was a strong military influence in the styles people wore.  The exhibition focused on those influences and changes which have had a lasting impact on clothing, both then and now. In some ways, that influence was surprising.

In introducing 'Utility clothing', which guaranteed a level of quality whilst still conforming to regulations, established designers were employed by the government to create functional garments that were also appealing.

Perhaps the most striking aspect of this design is that much of it would still look appropriate in a modern context. 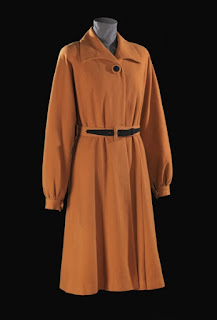 Coat from the CC41 label. (Photo from IWM website). You could easily wear this today.

I was so excited, and having done lots of reading around the topic, when people standing next to me were pondering aspects of the exhibition in conversation with each other, I may have had to jump in and excitedly tell them things (not very British thing to do)!

My big revelation for the day was this - the production of 'utility clothing' developed some methods which are still used in mass production today. Ironically, the clothing worn in times of 'Austerity', which we view with nostalgia as a time of thrift and resourcefulness, laid a foundation for modern 'fast fashion'.

Stopped in the bookshop for books and CDs. I wanted to buy ALL OF THEM. Except the ones I already had. I left with just a few, and some things to go on the Christmas wish list.

For a wonderful overview of the many of the impacts of rationing on fashion, please click here for the Imperial War Museum article link.
Posted by Zoe at 19:28 2 comments: 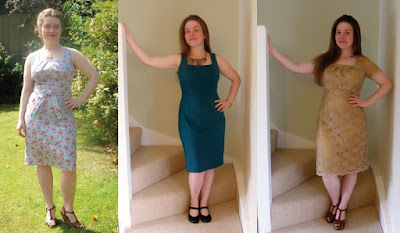 Some years ago I made a favourite pattern out of three different fabrics.

It was a really interesting experience and taught me a lot about how fabrics differ from each other. So this year I repeated that experiment.

I made the same dress (New Look 6184. I made this for the first time a couple of years ago) three times, using a polycotton, lace and polyester satin, and a ponti.

Each style hangs and moves a little differently, and requires different treatment in construction. 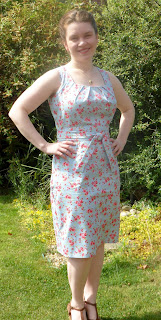 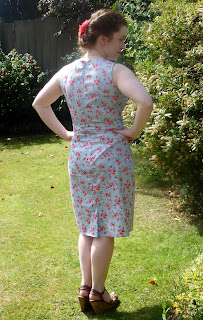 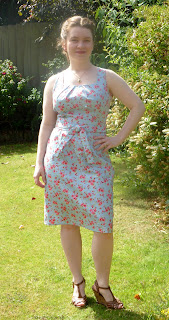 Polycotton is soo easy to work with. It's crisp and easy to stitch as it doesn't distort much as you work with it, so ideal for beginners. The tucks at the neckline are crisp in this fabric. The downside is it does need ironing and creases a lot when you wear it. I feel the flimsiness of the fabric means it's only really suitable for really warm weather. But I did feel rather pretty in it. ;)

Next up, ponti de roma. I left the belt off for this one. Does look good with a chunky belt too. 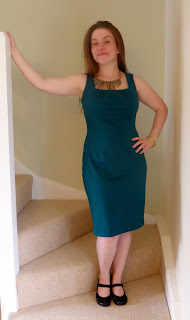 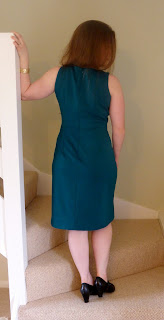 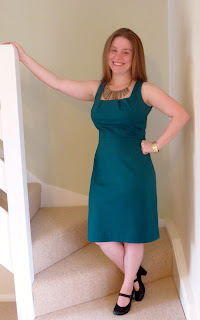 I inverted the pleats at the neckline on this one. Initially I was thinking of putting some beading in the front, but ultimately liked how it worked with this necklace so left it off.

Because ponti is a stretch fabric, its not really advisable to use it for a pattern like this. I had to take each side seam in around 1.5cm, which is why the neckline is so wide. Generally a pattern like this would be drafted for 90% of the width of the same style in a non stretch. I had to adapt it a bit as I went. It's also quite thick and can get bulky at the seam junctions.

That being said, I love this dress. It feels incredibly comfortable. I can move, and I'm not worried about creasing! I could omit the vent as there is enough stretch to walk in the fabric itself. This is an ideal work-wear dress, and reminds me why I'm so fond of stretch fabric. I think I might see if I can adapt the pattern slightly and make this version again.

Finally, the lace! You've seen this one before.

This dress is exactly the same except that I borrowed a sleeve pattern from elsewhere. 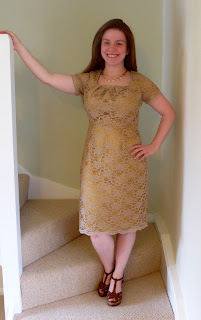 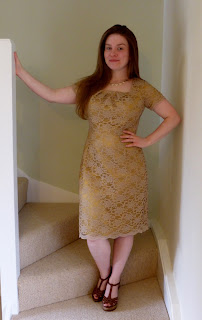 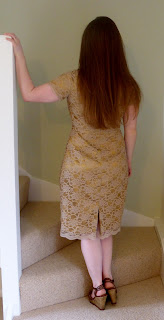 The cutting for this pattern is a bit different. There are two layers. The lining layer is cut as usual, but the lace layer has to be cut with the scallops on the hem line, rather than the edge of the pattern. Consideration also has to be made for how the scallops join at the seams as well. The lace skirt is separate from the lining.

I love this dress, but I wouldn't regard it as the most comfortable garment! Definitely for formal occasions, not for sofa wear.

Each dress really does look quite different. I know with increased sewing experience I see the similarities between clothing much more readily than others. I'll frequently spot when new season stuff is exactly the same as last years - but in a different colour. Other people don't notice that though.  No-one has *ever* commented on any of my dresses being the same style as one I've worn previously. If you want to create a varied all occasion collection, you need less patterns than you might initially think. Good news for those of us who are difficult to fit.

So dear readers, what about you? Do you have a favourite pattern you've tried in different fabrics? Were you pleasantly surprised or disappointed with the results? Do you have fabrics you love or hate using?
Posted by Zoe at 19:53 No comments: