The Challenge for June is to design your own fabric. There are lots of different ways to go about this, and for the purposes of this challenge, they are all equally valid! You might investigate digital fabric printing, like Spoonflower / Woven monkey, or try printing by hand – silk screening / printing etc. Heck, try potato prints. You don't have to make this too big, but its not a limited challenge either!

The purpose of the challenge is to design the fabric, submissions can be concepts and sketches or a finished piece of fabric.

I've been considering a few ways I might go about this.
I haven't done much designing of fabric before. I have armed myself with this book.

'Printing By Hand' by Lena Corwin. 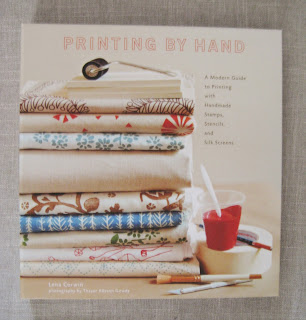 For a home- production option. She covered quite a few different printing methods, including stamping (linocutting if you want to make your own stamps) silkscreening and stenciling.

I have a silkscreen kit which I received for Christmas, and have yet to make use of. I remember doing silkscreening in Primary School. We cut out a paper design, and then placed the screen on top of the cut out. Fab! 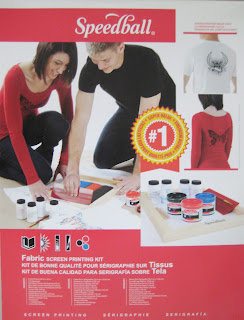 Stenciling is also a bit under-rated. If you haven't heard of Natalie Chanin yet, you might want to visit her website. Her company makes the most amazing garments using a combination of humble stenciling, applique and embroidery. Both rustic and exquisite at the same time, she has published several books on the method (all of which I own) and has stencils which can be downloaded from the website. You may not have considered jersey a suitable fabric for a wedding gown until you see this stuff.

Of course, if you'd prefer a more modern and high-tech approach, check out companies like Spoonflower. (US based) 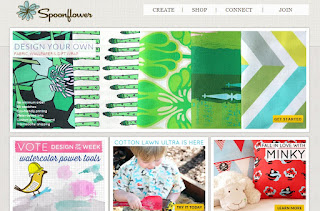 Or Woven Monkey (UK based) 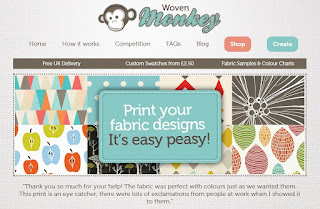 Both of which are companies which will take your digital designs and print them on to fabric for you. Sweet.

If that sounds intimidating, know that Burda Style is running a course on how to do it. 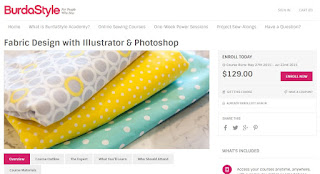 May Challenge - The Reveal!

May was an ambitious challenge.

In the interests of keeping things manageable, I made 3 simple items.

Each of these is self drafted, and of course I can wear either shirt with the basic skirt.

I would have much preferred a deep purple skirt, but budget and timeframe dictated I used what was already in my stash. I expect I will get a lot of use out of this skirt, even if I don't love it in it's own right. I much prefer making fun tops and dresses to functional basic pieces.

This is the simple cowl top I've made before. (Drafting instructions here) 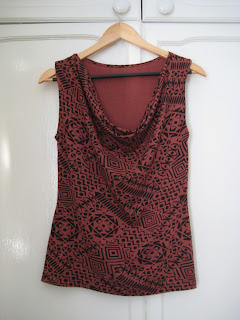 This is a simple t-shirt, with a high neckline. I drafted and compared the t-shirt shirts from  “Patternmaking for Underwear Design”, by Kristina Shin, PhD and "Metric Pattern Cutting for Womenswear", by Dr Winifred Aldrich to my own t-shirt block, which I had copied off an existing t-shirt (instructions for how to do that here).

I was surprised how different the patterns produced were. I probably shouldn't have been! This shirt is a combination of all three patterns. The shoulder line is slightly improved from my copied t-shirt. Whether that improvement was worth the 3 weeks I spent pondering it, I can't really say. 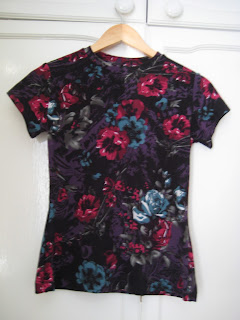 This skirt is drafted exactly according to the Winifred Aldrich book as well. Not bad, but I'm not mad about the positions of the front darts. They're tricky to see in the photos. I've come to the conclusion that because my hips are proportionally broad in comparison with my shoulders (or my shoulders are proportionally narrow, whatever), the darts need to be closer to the centre front to look balanced. 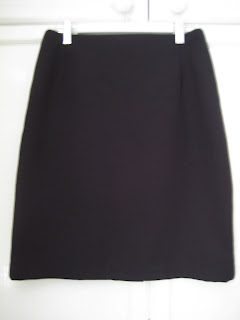 I am still looking for some alternative colours, and my fourth piece for the set would have been a cardigan, something along the lines of McCalls 6844. I did start one in a color approximately the same as the top circle in the plan below, but it didn't turn out as well as I wanted, and is currently in the naughty corner. I may pull it out again at a later point. When I find a fabric in an aubergine colour which would be suitable for a skirt, I'll probably make that again too (with the darts shifted). 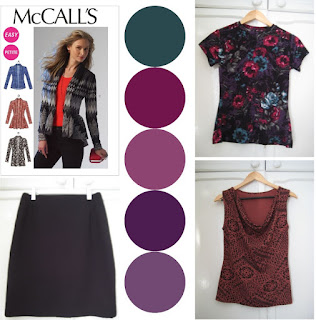 I have discovered a need for some more of the simple, practical and block coloured items in my wardrobe, but I don't like making them! And I really don't love black - so I can see a need to do some focused shopping for skirt and trouser fabric.
Posted by Zoe at 20:58 1 comment:

Tweaking the Owl T-shirt. Also, how not to look fat.

The question 'Does this make my butt look fat?' is not as horrible a question as it first seems.  It is obviously loaded with a cultural judgement about size, but when you look at it objectively, the question is actually about the clothing. Instead of blaming the butt, it points the blame squarely at garment, where it belongs. Only sometimes we forget this, and mistake an unflattering garment for a personal fault.

Because I can sew, I've developed a view of my body in relation to clothing that a lot of people haven't had the opportunity to experience.
The upshot is, clothes that fit badly, make you look sloppy. Which is completely different to saying there is something wrong with your figure.

This is why I'm putting so many horrible pictures of myself on the internet, to try and illustrate this point and hopefully save some people from the trouble of hating on their body when it isn't warranted.
I bought this shirt because it had a cute owl on it. Even though it gave me a lumpy figure.

But when I say 'it gave me' a lump figure, that is exactly what I mean. That is not what my body looks like. If I wore clothes that fit like this (as most off the rack stuff does*) then people would think I did have a lumpy figure. I would probably think that too.

Fortunately, I have enough experience with fitting to be able to put it on and think 'Dang, that fits like a sack' instead of 'Oh my goshness, I have really let myself go...'

If you've become convinced there is something wrong with your shape because all the clothes you wear make it look wrong, and because of the fact that nothing ever fits, that might just be baloney.

There is no reason off the rack clothes are a 'better' shape than what you have. They're just a 'mass production' shape, which is arbitrary, and inevitably not right for most people. It is completely separate from health and fitness. Health and fitness are important goals, but if you're trying to change your figure to suit your clothing, you are putting the horse before the cart. Change the clothing instead.

Anyhoo, to do this mini makeover, I took the whole shirt apart. That isn't always necessary for an improved fit, but in this case a) I wanted to raise the owl, and b) the construction was shoddy to begin with. I mean, yuck...

So I took it completely apart, and re-cut the neckline at the front to reposition the owl. I had to be sure to change the back to correspond with this adjustment. 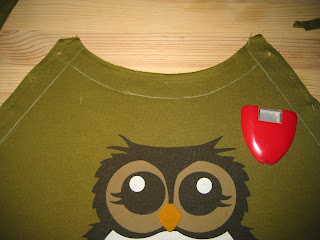 After I did this, I learned that the owl was never in the centre to begin with, which was most frustrating as I then had to go a bit tighter than I originally intended. This garment spent about a week in the naughty corner while I considered and resented the lopsided owl.

To create the side seam line, I referred to my tried and true t-shirt pattern and chalked in the new seam accordingly. I want the shirt to skim over my waistline, not add a puddle of bulk in the middle. 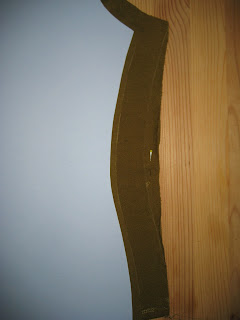 I cut that, and reconstructed the shirt.

There you have it. Much better. Tinsy bit tighter than intended but whatevs. That owl is cute. 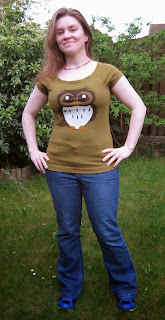 A good fit can create a better result than dieting and self depreciating perspectives any day. 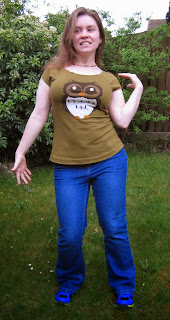 So learn to adjust your stuff. And if you're already doing this, point out to your friends that the faults they perceive with themselves, might actually just be faults with their clothing. Don't tell them their butt looks fat. Maybe just skip the word fat altogether, because it's loaded with judgment. If it really isn't great, tell them that dress doesn't do their awesome figure justice. 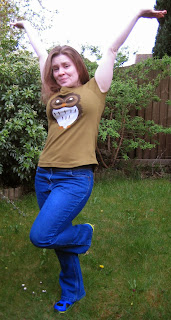