May - As in 'May-be It Would Be Better If Weekends Had More Days In Them'. Also, Wedding Dress Design Process

I am perfectly aware that it is June already. I just thought I should stop and say I know it looks like the theme for May was Pigs, but that wasn't my intended theme at all.

The problem I am having is too many ideas. At present I have 3 projects humming along full throttle, a couple more cut and ready to go, another 20 ideas in post it notes on my ideas board, and they just keep popping into my head too fast for me to catch them. While I thoroughly enjoy my job, (and genuinely enjoy going into work each morning) I do acknowledge that it frequently gets in the way of my blogging and sewing schedule. Also, sleep and stopping to eat on a regular basis.

I am sure a strong argument could be made for more people with more leisure time, and I believe it could be made as a case for a stronger economy. Its hardly an accident that so many of the groundbreaking scientific discoveries of the 18th century were made by gentlemen with ample time on their hands. I'd like to propose a 3 day weekend every weekend. Except on special occasions, in which case it should certainly be extended to four.

In addition, as far as the weather goes there have been some pleasant days of late. Since pleasantness is, as best I can tell, the ultimate goal of English existence, it would be a waste not getting out in about in them. It's not procrastination, it's balance.

But I do keep saying 'and I'll get back to that in another post' and then I don't.

So today I'm going to do just that, and we are looking at the design process of the wedding dress in more detail. Its a pretty thorough round up of what a design process usually looks like.

I've popped out the back and got some photos of my toiles (mock ups in cheap fabric -  French word, sounds like 'twah-l') in the back yard. I wouldn't wear them in public, but my indoor photo spot has a wall almost exactly the same colour as the fabric. It is a little unfortunate that the skirt gets a bit see through here and there, but since I'm going to be posting a bit of side boob in this post anyway, I'm coming to terms with it.

Looking at the finished product again.

The style is a full length princess line, with a sweetheart neckline and a mermaid skirt.

I can be a bit of a perfectionist, and the time frame I had for this was quite tight. So I had to limit myself to 3 toiles on this one. 3 toiles is fairly standard when I make a new design, but if I’d let my nerves get the better of me, I could have done more!

First Toile
Working from my basic block patterns, I made a simple bodice with a long skirt on which to plan my design. I put the neckline I wanted in straight away, since that's a pretty easy change.

It is not for walking in. 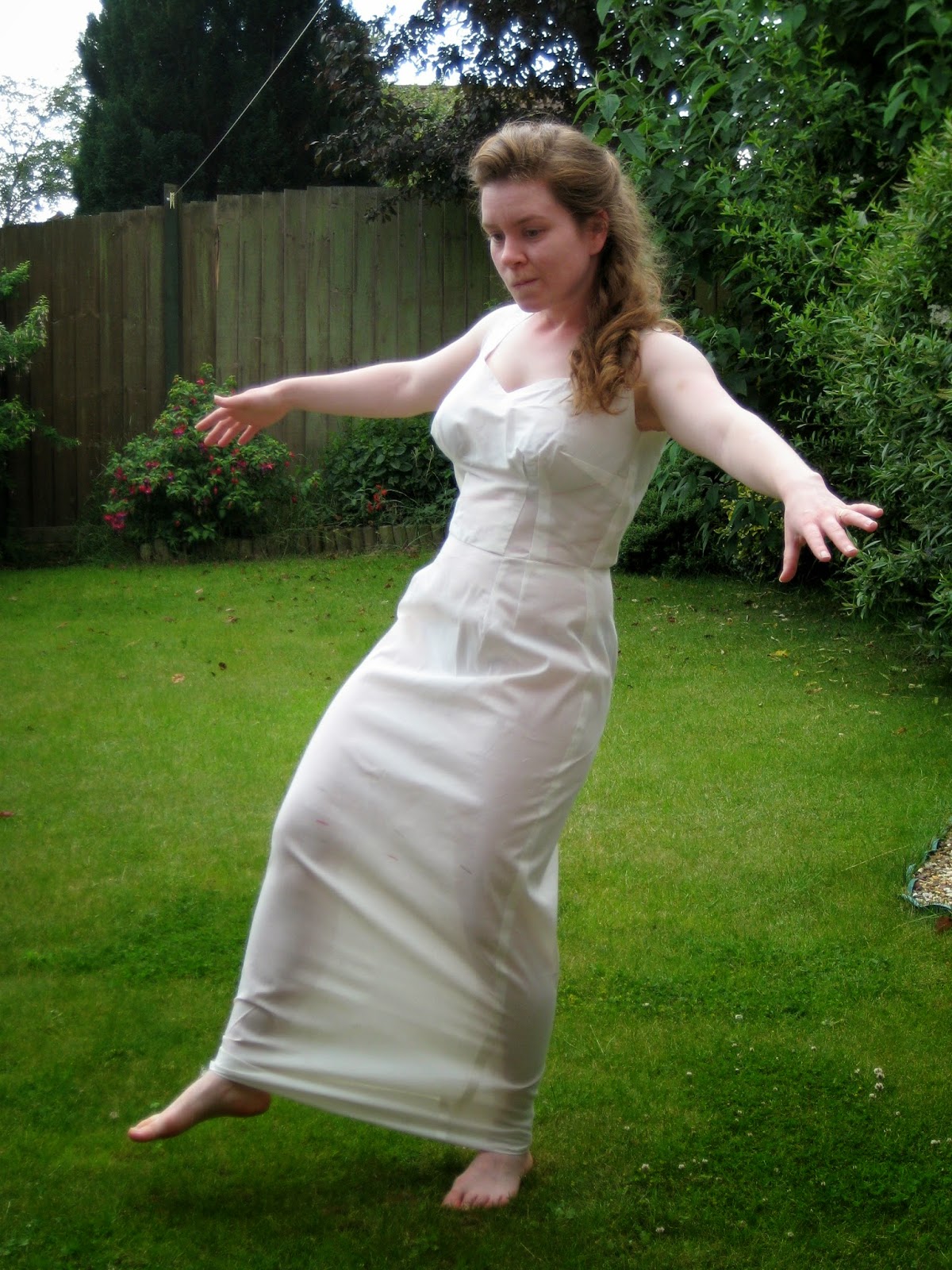 Initially I envisioned I would have a gathered sash running under the bodice and to the back, something like this...

but then I changed my mind after the second toile. Allow me to put on my thinking face.

I had decided I wanted a mermaid skirt, and put together a pinterest board of styles. I needed this to flare at exactly the right spot. I wanted variation in the position where the skirt flared out; below the knee at the front, and below the bottom at the back, so I could bring it in a cheeky bit.

I enlisted the help of a friend, who got to draw on me throughout this process. Sarah drew in the points where it needed to flare out. I've added on here (in red) the points where she marked, the blue lines indicate where I need to split the skirt and create a seam, and the black lines represent the shape of the new skirt.

I know it looks very crinkly in this photo! I also accidentally made one dart inside out. Luckily it didn't matter on the toile!

Of course that's the bottom half of the dress only. I aligned the new seams with the existing darts, and marked in a princess line to replace the darts. 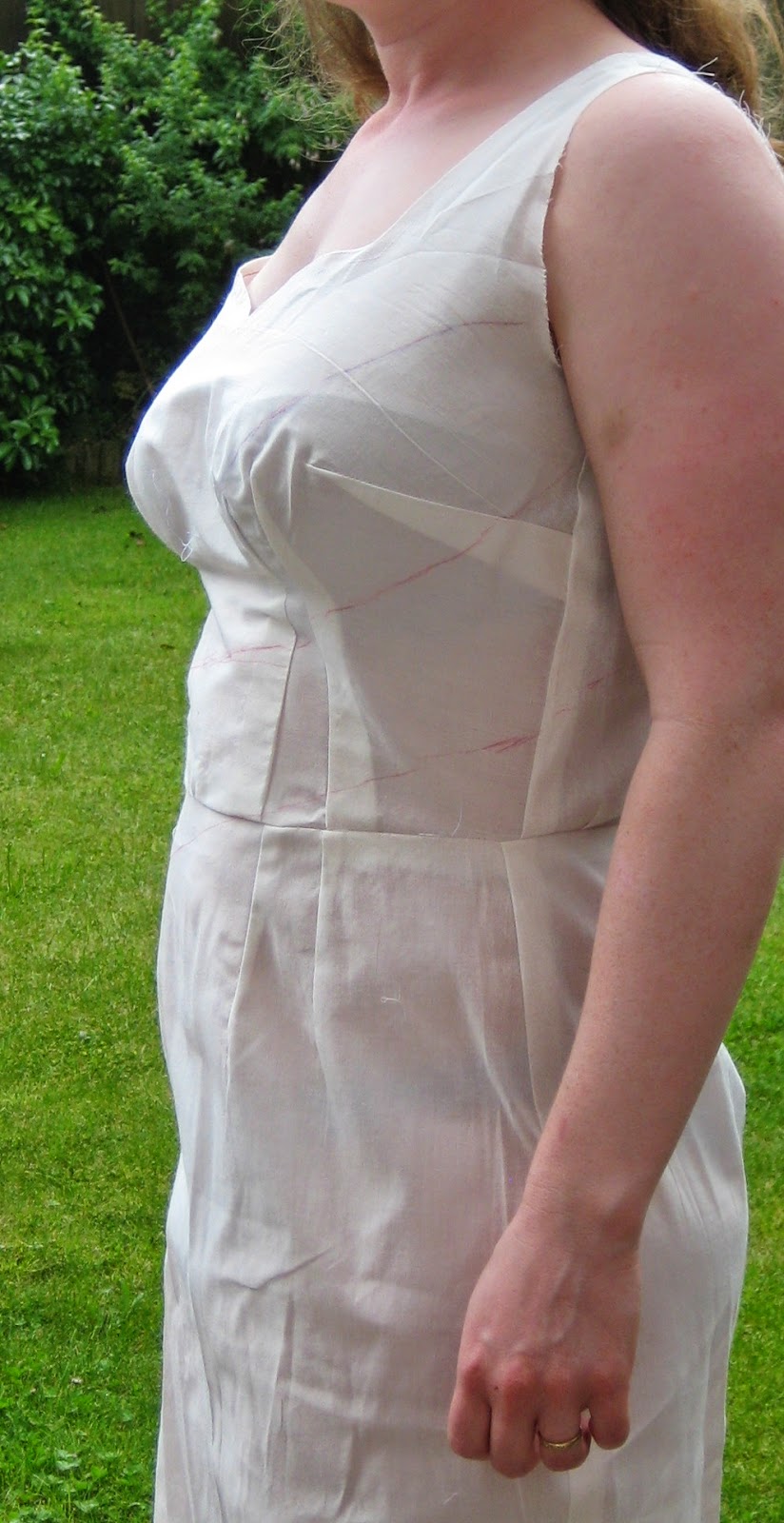 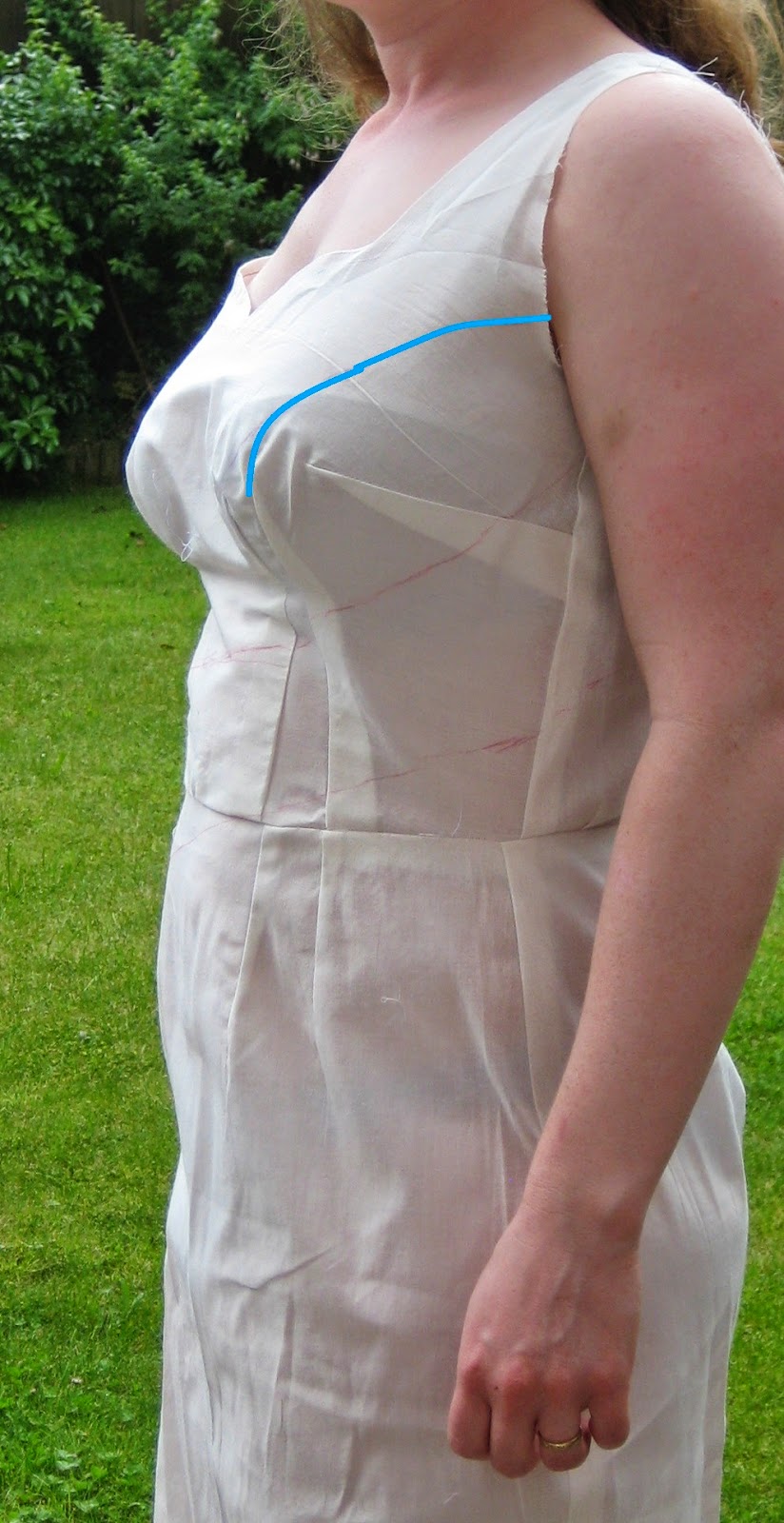 By changing the bodice into a princess seam, I could put the bodice and skirt pieces together without a waist seam.

From here I created the pattern pieces for the second toile, making the following changes.
*Split the skirt into panels.
*Split the bodice into panels with a princess line. This meant converting a dart into a princess seam.
*Joined the bodice and skirt panels to eliminate the waist seam and create dress panels.
* Flared the skirt.

Second Toile
On the second toile I had the seams mostly as I wanted, and I liked the shape and long lines which is why I decided to leave the sash/band off. With the major elements of the design now in place, I looked at fitting (again with a little help from a friend) and pinned in to make it just that bit more snug in all the right places, and a bit looser in the right places too. I transferred those alterations to the pattern. I'm afraid I didn't get a photo of the toile before those alterations - I was in a hurry.

Here you might see the lines on the back which indicate how much to bring in on the back overall. This was where it was pinned, and then the same amount came out of the seams at the side. That allowed it to fit snugly around the curve of my back. I brought it in a bit down the side of the thigh and under my bottom. Sarah seemed thoroughly entertained by the privilege of drawing on my bottom. I've been sewing so much I've almost forgotten that is a bit of a weird thing to do.

At this point I also checked the width of the pattern pieces against the fabric and panicked, because I didn’t think I was going to have to enough room for all the pieces.  I narrowed the flair of the skirt by around 3cm per panel, and was then able to fit all of the pieces onto the fabric I had (there was a flappy experience at the shop when I found out they didn’t have any more in stock!)
Third Toile
Final test run for fitting before the silk. 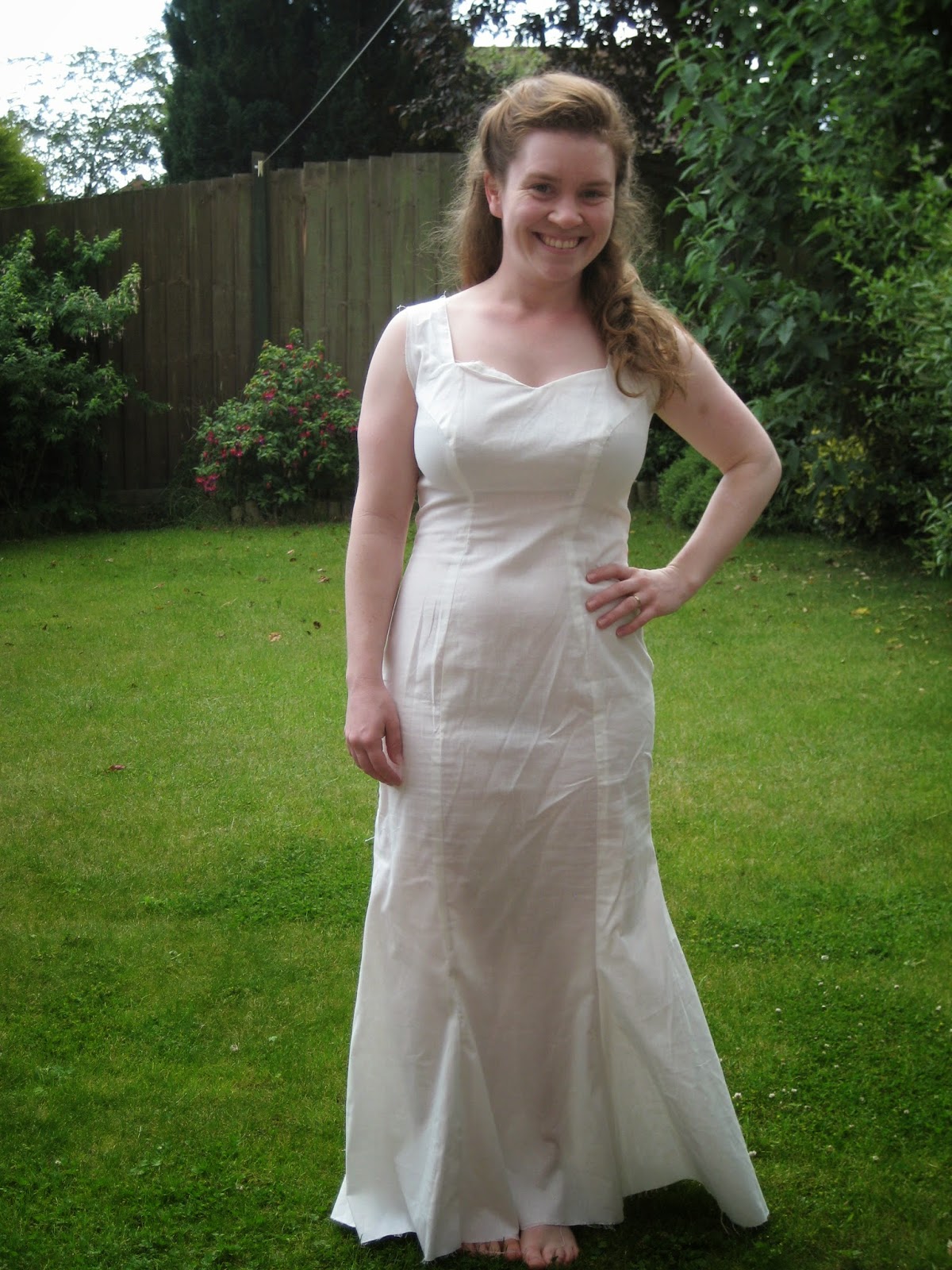 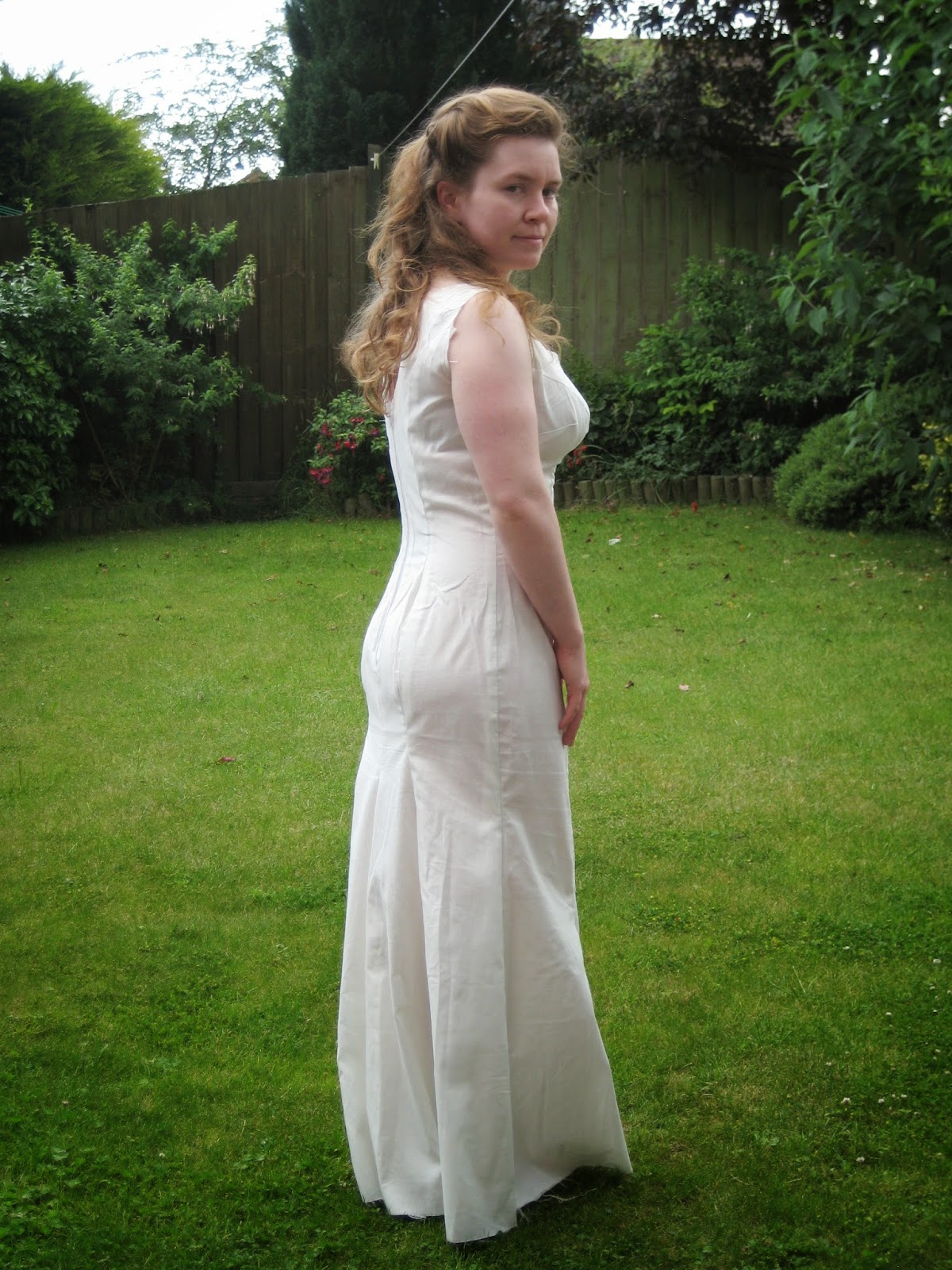 This one was much closer. Still not quite perfect, because I wasn’t thrilled with the shoulder seam, but without oodles of time for faffing, it was close enough. I wore it around the house for a bit, to check that I was able to walk and sit down without any unreasonable strain on any seams. Very important in this case in particular as silk doesn't have any give or stretch whereas cotton has a little bit. I had to be mindful that it was going to behave a bit differently. None of the seams popped, no discomfort was endured, and the skirt moved in a satisfactory way-  so it was all set to go.

Silk. So silk is a fussy thing. I haven’t had much experience with silk in the past (because of budgets and silly stuff like that). But nothing less will do on such an occasion. Silk needs very fine needles, and very fine pins as it is ridiculously easy to damage the fabric and leave a permanent mark. I did a bit of research around handling silk because I wanted to get it absolutely right, but then the research combined with my nothing-but-perfection-will-do made me want to hide under the doona* and not come out. In the end, I just had to jump in.

I put a new cover on the iron board, emptied the water chamber and used a pressing cloth to prevent marking. No steam.

The silk dupion that I chose held up reasonably well to pin marks (although I kept the pins in the seam allowance when I pinned it). But it frayed like crazy. I zigzagged all of my seam allowances before construction so it wouldn’t disintegrate. In addition, I employed a little couture technique here and there, and wherever I clipped the seam around a curve, I used hand overcast stitching to prevent fraying over the clipped areas. Important, because as soon as I cut it, it started to deteriorate. Next time I work with a silk dupion I think I would add a little extra to the seam allowances. If I had had all the time in the world, I would have seriously considered binding every seam.

The design process is a circle. And every project I make, I see things that could be better or different, plus I know every tiny imperfection that no-one else even sees. This one was no different! Looking at my photos, I am still critiquing my efforts. Usually theres a period of time when I can't wear something I've made because I've critiqued it too much. It takes a few weeks of sitting in the closet before I can go back and look at it. Luckily that will not apply here. But I do feel that way a bit - and have doubted every choice and struggled for a little while to even look at the photos. 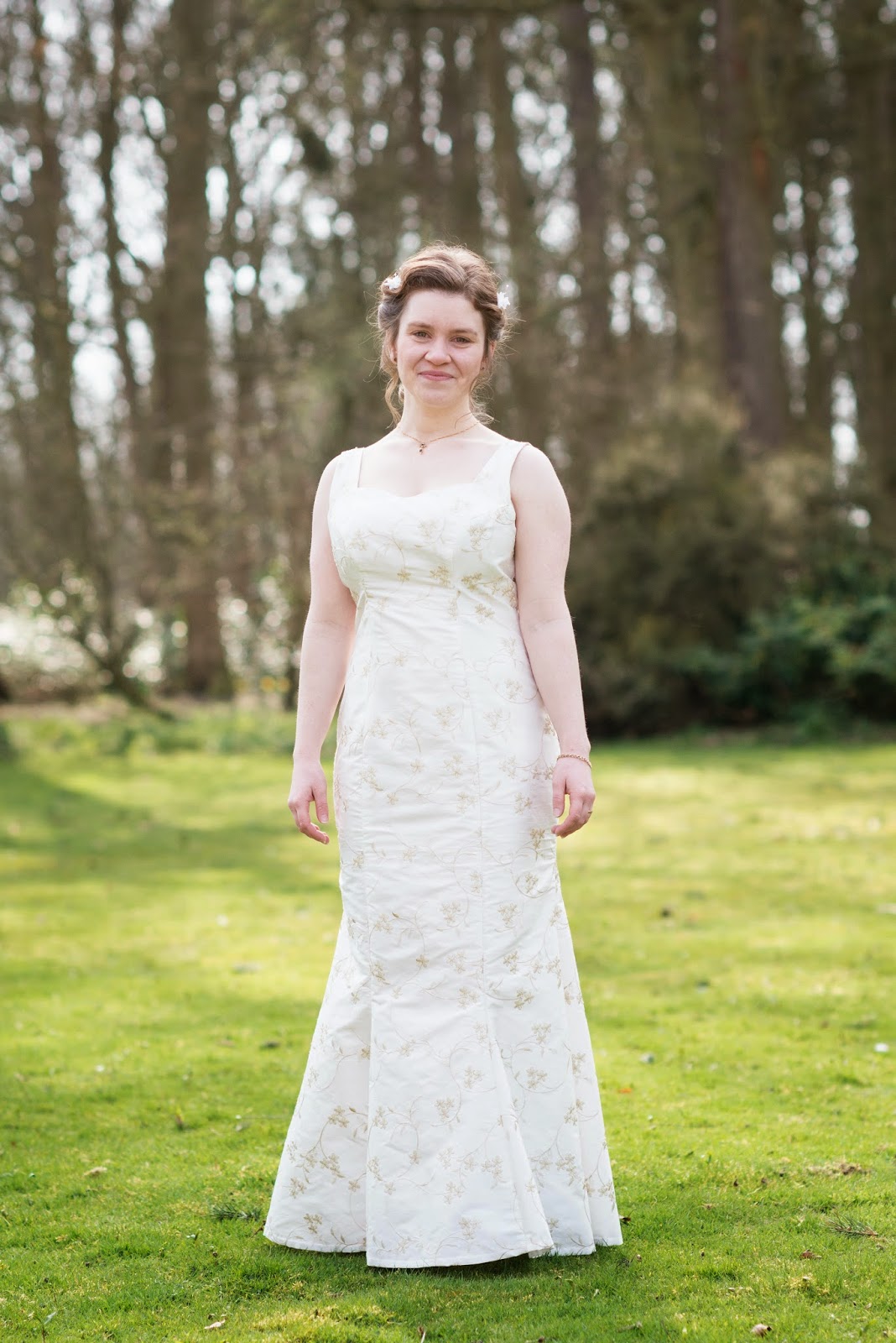 I'm getting ok with it now.

The details of the drafting really do need a whole post each. I will get to them eventually I'm sure!

(*A doona is a duvet for anyone not from the land down under. I'm not giving up this word, because it sounds like a cuddle.)
Posted by Zoe at 23:26