This is a non-sewing, body image post. But sewing and bodies are absolutely intertwined.

I might occasionally indulge bit of trashy net surfing. Sometimes I spend a bit of my evening watching you tube clips of fussy puppies. Or checking out regrettable tattoos.(You don't want to see them all, for the record.. but this one from Buzzfeed cracked me up).

The other day I was busted checking out celebrities without makeup.
"Bringing them down to your level?" was the cheeky comment passed.

See, I don't see it as 'tearing someone down' as much as I think of this as 'reminding myself that that 'level' is an illusion'. And I think that if we think what we're doing is 'tearing someone down', in order to do that, we have to put them above us. We put ourselves down. I'm not disputing that most celebrities are above average in the good lookin' stakes. I'm just saying they're also real people.

Its a bit rude, since those in question may not have particularly wanted to offer those images to the world. At the same time, there's great value in taking some time to reflect on how and why our perceptions are so misguided in the first place.

So here are a few bits and pieces that say this in far better terms. A directory of acceptance, if you wish. And not as trashy as celebs without makeup. Thanks to the friends who have sent these things my way over the years too.

Websites / and internet stuff that's good for you:

1) Hats off to those celebrities who repeatedly tell us about the illusion. ( Remember the wonderful photos Jamie Lee Curtis shared with the world?)

"Grammy Award-winning singer Lorde saw a photoshopped version of herself from a recent show. So what did she do?

She tweeted a REAL picture of herself from the same show, saying: "i find this curious - two photos from today, one edited so my skin is perfect and one real. remember flaws are ok " " 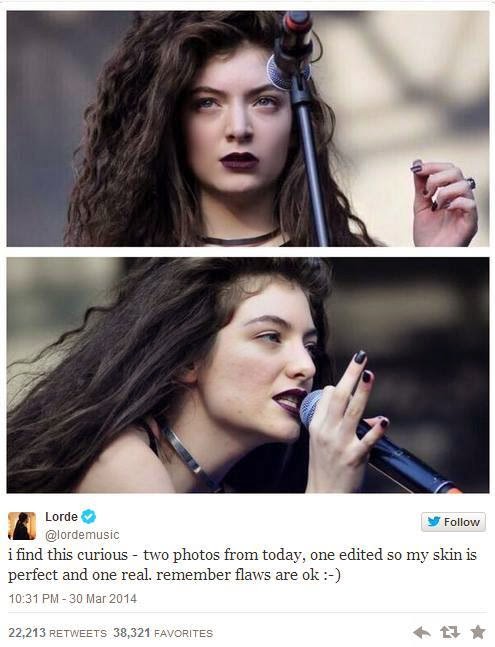 2) May I also draw your attention to this amazing photography project. Photographer Gracie Hagen took a series of photos of ordinary people (nude) in flattering and unflattering poses.

This series was made to tackle the supposed norms of what we think our bodies are supposed to look like. Most of us realize that the media displays only the prettiest photos of people, yet we compare ourselves to those images. We never get to see those photos juxtaposed against a picture of that same person looking unflattering. That contrast would help a lot of body image issues we as a culture have.

Be aware that this project features full frontal nudity (so not safe for work) but this is the most inspiring, accepting, honest, and I would go as far as saying wholesome nudity you're likely to find anywhere, and I strongly encourage you to GET OVER TO THE SITE AND CHECK IT OUT. If this doesn't shift the way you look at your body, I don't know what will. Oh, and she's also publishing this series as a book. Guess what's on my birthday wishlist? (PS. Your mum was right, stand up straight).

3) Fancy a bit more glamour in your life? Earlier this year, BUZZFEED created a wonderful video.
Go here, and Watch Four Women React To Being Photoshopped Into Cover Models. Turns out its not all it's cracked up to be. :)

4) Last year's 'Real Beauty Sketches' Video (from Dove) had a police artist sketch women as they described themselves, and as they were described by others. Apparently we can be tough on ourselves.

5) Kate Harding's BMI project takes photos of women of all shapes and sizes and challenges the BMI concept.

6) 'My Body Gallery - What Real Women Look Like' shows real people of different shapes and sizes - you can find people similar to yourself.

7) 'The Shape of a Mother' - puts together a collection of photographs and stories about womens' bodies have changed after pregnancy. It's creator, Jessica, writes:

It is my dream, then, to create this website where women of all ages, shapes, sizes and nationalities can share images of their bodies so it will no longer be secret. So we can finally see what women really look like sans airbrushes and plastic surgery. I think it would be nothing short of amazing if a few of our hearts are healed, or if we begin to cherish our new bodies which have done so much for the human race. What if the next generation grows up knowing how normal our bodies are? How truly awesome would that be?

Once you're feeling all the body love, you could check out this post from 'Dress a Day' about dressing for something instead of against something. You know, not because you hate your body and want to cover it, but because you want to feel awesome in the stuff you've got on.

Steph, from 3 Hours Past The Edge of The World, designer of the super-wearable 'Cake' patterns, also writes about body image, along with reflections on the balance between loving your body and not wanting to let yourself go!

I feel like I've invited you to my house to check out all my favourite stuff. I hope you enjoy some of these sites too.