*NOTE* I'm trying to make these posts easier to follow, in the hope that others can try this for themselves. Hence the inclusion of sketches / model patterns. Please let me know if you think this is useful!

This is Maria's maxi dress! Essentially, this is a really simple design and pretty ideal for layering. Perfect for this time of year. The difference between this and a commercial equivalent is the fit. 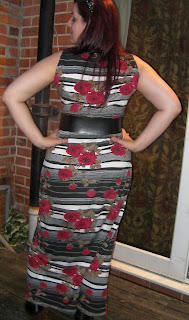 I would not have chosen to make a maxi dress without prompting, and Maria has said she would not have expected this shape to work on her figure. Those of us on the curvy side are used to stretchy shapeless things actively fighting our best features! But an improved fit means a relaxed, but more flattering effect. We are both very happy with the way this dress turned out.

The maxi is an extended version of the tank (instructions here). Previously I had made a tank dress based on putting together a skirt and a tank top pattern. Maria didn't think she would wear a skirt, so we skipped that step altogether. This dress has been drafted from just the tank top with darts. Of course, you could just as easily use a tank or t-shirt without darts. Instructions for copying a t-shirt are here. Whatever you use, make sure the waistline is clearly marked on the pattern.

Essentially, turning a tank top into a maxi.

I had already made the tank top based on Maria's t-shirt, and tested it for fit. As a tank it was fine, but for a we wanted a bit more space on the hips for comfort. A dress requires a bit more wearing ease than a t-shirt - you don't really sit on the back of your t-shirt like you do a dress, and your bottom wriggles around rather a lot more than your torso.  Not to mention having enough space around the thighs- I've made a dress which is a bit too snug around the thighs before, and that thing crawls up my legs as fast as I walk across the room. It isn't pretty. So in the interests of 'staying classy', a t-shirt can sit snugly on the hips, but I feel it needs to be looser for a dress.

I use big rolls of brown wrapping paper - the kind you wrap stuff up in and tie with string to make it into favourite things.
Starting near the bottom edge, I drew a horizontal line across the paper. Underneath that, I put a 3cm hem. I then measured up along the edge (perpendicular to the hem) the length from hip to floor. I then put in the waist line.

I lined this waist line up with the waist line on the tank top pattern and traced the outline of the pattern. I then measured down from the waist line the waist to hip length, and drew in the hip line. 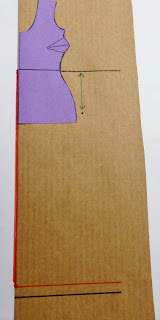 We decided 4cm of ease around the hip would be a comfortable amount. I compared the hip on the pattern [(front + back)x2, not forgetting to take seam allowances into account] to Maria’s body measurements, and then added ease on both sides - 1/4 of the difference for front and back. If you didn’t have a top which went down to the hip, you would put in the measurement ¼ hip + 1cm for the front, and ¼ hip + 1 cm on the back, plus your seam allowance. So if [for mathematically convenient example], your hips were 100cm around, and you were using 1cm seam allowances, the front would be 27cm, and the back would be 27cm. Although, if I wasn't doing back darts, I would make the front 27.5cm and the back 26.5cm.

Smooth out the line from waist to the new hip. I would use a French curve, but it isn't completely necessary. I actually delegated this bit to Maria, and she just drew it in freehand like a pro. 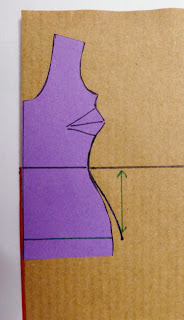 From there, I drew a vertical line from the outer edge of the hip, all the way down to the hem of the skirt. This creates a column dress that would be too difficult to walk in! So after a bit of discussion about how much space would be needed (and measuring big steps to comical effect) I added 4cm to each outer edge, and drew the line from the hip to meet that point. This creates a total of 16cm extra space to make it comfortable to walk in. (Maria has since tested confirmed that this dress is indeed very easy to walk in).

I did all of this for front and back pattern pieces. 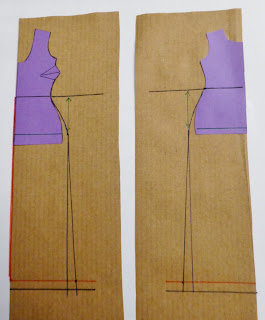 I wanted to include darts as per the tank dress. I used the same method as before. See here for instructions. 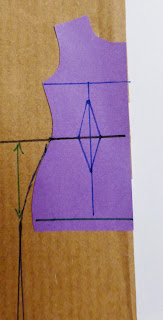 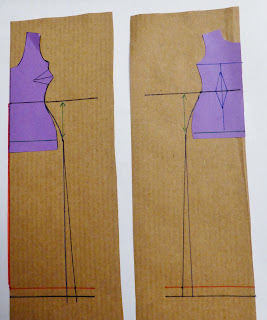 We cut both of them out.That completed the two pattern pieces required. I then cut out the fabric – on the floor because the silly thing wasn’t going to fit on the table!

The dress was then constructed – darts first, side and shoulder seams, and a simple folded edge to finish the neck and arms. 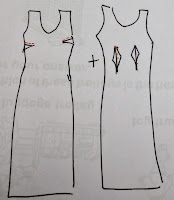 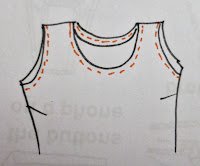 Please forgive the marks on the paper - I was recycling and didn't think they would show up!

At around this point we had a moment of inspiration. Earlier in the day we had gone to the local Vintage Fair. In general terms, I’ve seen better vintage fairs. L But there was a lovely lady there who was selling buttons. She was telling us all about different kinds of buttons and what they were made from, and when they were made. And explaining that collecting buttons does make you kind of nerdy. I liked her straight away.

Maria purchased a buckle from the lovely nerdy button lady, and as luck would have it, it was pretty much exactly the same shade of red as the roses on the dress. After a bit of playing around with it, and some discussion about belts and so forth, it occurred to me to put the buckle on the strap of the dress. I like the slight asymmetry it provides, and as it is a fairly wide buckle, it still makes for a modest strap. To do this, I hemmed the edge of the neck and arm up to 1.5cm away from the shoulder seam line before joining the seamline. I then slipped on the buckle, joined the shoulder and completed the edges.

Finally, we checked the hem length, and hemmed the dress.

This is a really simple design and a quick make. I think it probably took 4 hours all up, including measuring and drafting, and drinking lots of cups of tea.

Here's Maria styling it up with a yellow cardigan. Cooler weather is definitely on it's way. 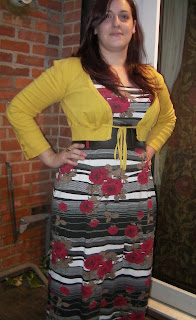 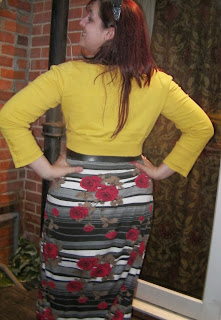