As promised, a break down of my dress design. The fabric I used is listed on FabricLand's website as 'Beware of the Cerise Snake'. Someone obviously has fun naming things there.

So, onto the nuts and bolts of it. As I said in my first post about this dress, I had initially intended to try a very different skirt design. I had started with a bunch of sketches, all focused around the skirt idea, and the bodice was secondary. But ultimately, the bodice was the most successful element, since as Jon carefully put it, my legs are fine, but they're not very long.

I began with a bunch of sketches, all with a view to trying the skirt silhouette. 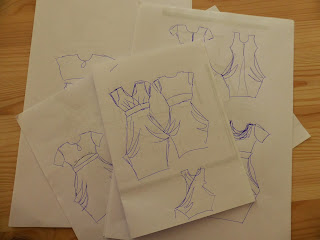 This was the concept I started with, although here I had inset sleeves, and I quickly decided to try capped sleeves instead. 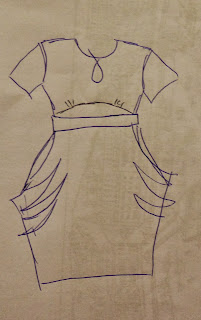 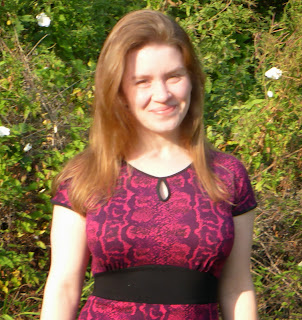 Still, you can see how it worked out from rough sketch to final dress.

From the sketch I copied out the tank dress with back and front darts, bust point, under bust line and waist line included. 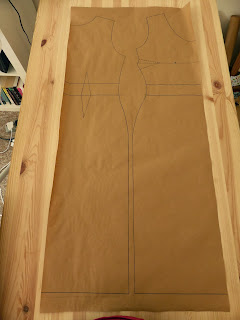 This is my concept broken down into changes to be made (in red pen). 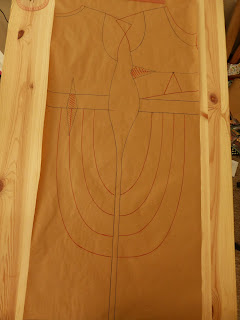 I've brought the neckline in a bit at the back and the front, and put the keyhole so that it just touches my original neckline. Capped sleeves and shaped waistband already in, and I've marked the darts to be eliminated, as well as the position of the gather under the bust. Since the capped sleeves overlapped, I had to redraw that part separately, but you get the idea.

The lines on the skirt were for my new shape, and I'm not going to go into detail about that since I abandoned it later. Remember when I made that basic skirt that I had a marginal contempt for (since I put an elastic casing on it)? Well, I said it would be useful even if I didn't much care for it, and as it happens it was. I pulled it out and used it just as it was in the end.

So looking at the other parts.
To do a capped sleeve, I looked in my copy of Pattern Drafting For Fashion (The Basics) by Teresa Gilewska. This is a pretty decent book - clear and simple pictures of individual elements of drafting. (I've bought copies in both hemispheres now).

So the capped sleeve is an extension of the sleeve (a lot more than I realised, I really hesitated doing this!) which is then dropped down. Here's mine on the back (being redrawn as a separate piece). Sorry the photo is so yellow. 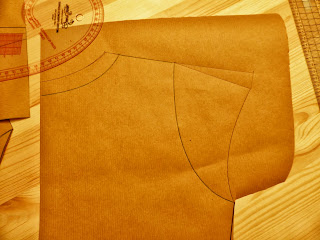 Here are the pieces separated out. 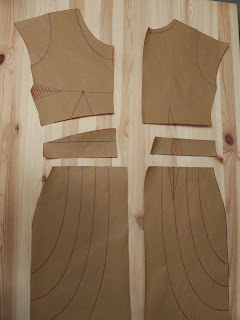 For the front bodice, I needed to rotate the darts. That means slashing through to the bust point from the original dart. 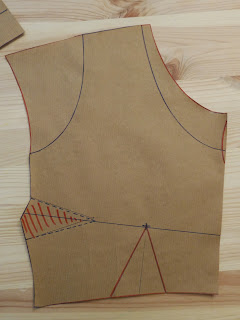 And bringing the edges of the existing dart together. 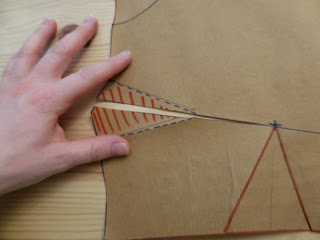 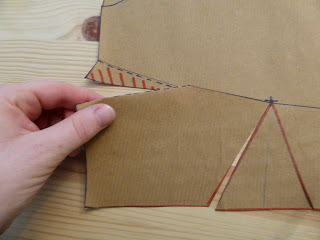 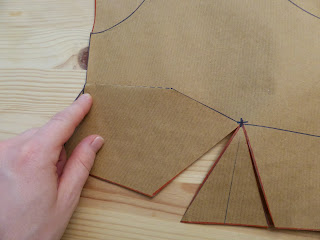 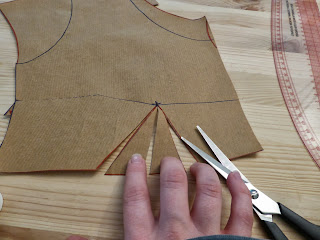 The fullness is released in the position of the new dart. Here I have cut in three places, because I want to gather between the two outer lines. The original distance is 6cm, so I will gather between those two points to 6cm.

I glue the pieces down onto a new piece of paper. 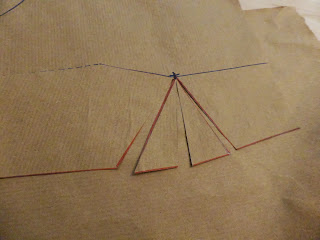 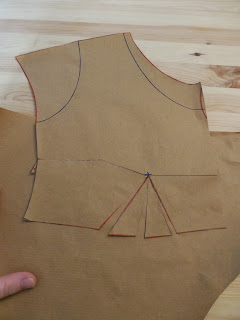 And smooth out the line to make a curve between the slashed strips.
I also add a seam allowance underneath the piece. 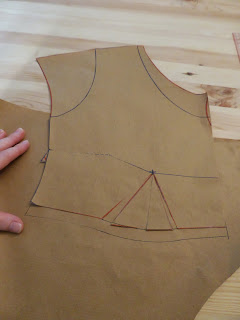 And cut it out. 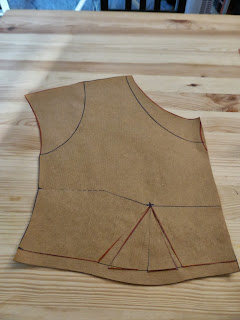 The back bodice stays the same, but again I've added the seam allowance. I've kept the darts, although they are now shorter. 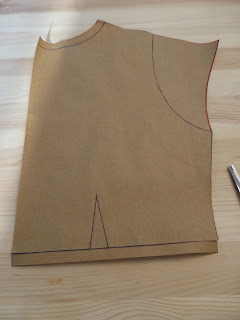 Moving to the waistband pieces. 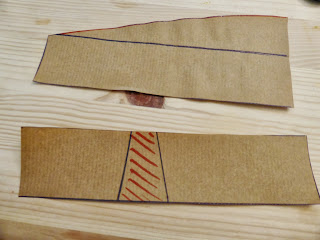 The back waistband dart is eliminated by cutting and gluing. 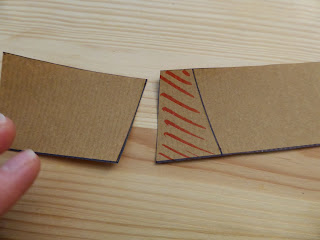 And then I want to contract the waistband to make it firmer against the body. I decided to take 1.5 cm out, so I made three vertical breaks and took 5 mm from each. 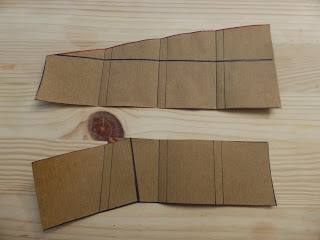 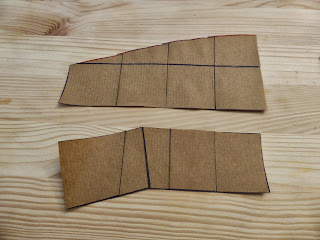 I ended up taking another 1cm out of each after the second fitting.
Because they were quite thick already, I traced them and added my seam allowance. 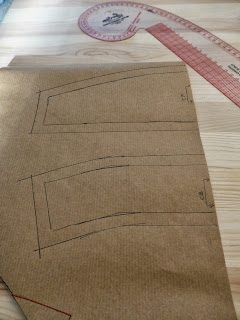 I made the waistband out of double layer fabric. I ultimately decided to go for a black waistband, and as luck would have it I had an off cut of a black t-shirt I was able to use. One minor point for saving and recycling there which doesn't really offset the failed skirt idea. :) 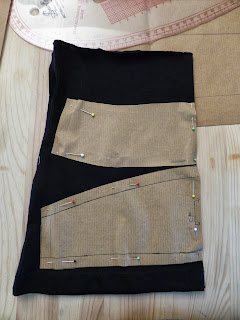 In hindsight, it would have been really useful to have put the markings for the dart/gather position on the waistband (obvious as soon as I started cutting). Because the band was smaller than bodice piece, I had to use the method I described here to put them together smoothly. I am pretty chuffed with this, and it hugged nicely. 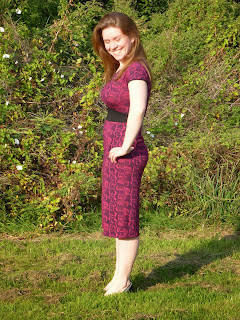 Pleased that the holiday weight is gone.

So here are all the pieces laid out, including the basic skirt pattern pulled out from the collection. 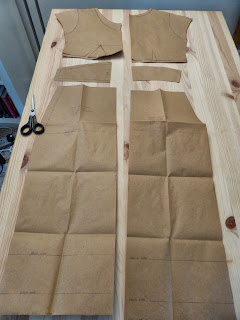 And that's about it for the drafting.

Construction order was darts, then gathering. 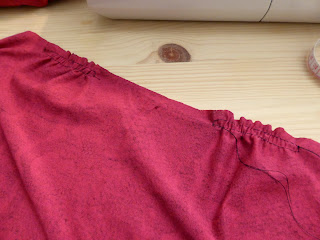 I joined the bodice, waistband and skirt for front and back separately, as described earlier.
Then I joined front and back, shoulders and side seam.

Then I completed the edging on the sleeves and neckline. For the keyhole neckline, I did the keyhole first, and then ran the binding around the front with the keyhole edges touching.

Finally I hemmed the dress. Because I was so pleased with the finish on the neckline, I was being a bit fussy at this point, so I did it by hand to avoid visible stitching. 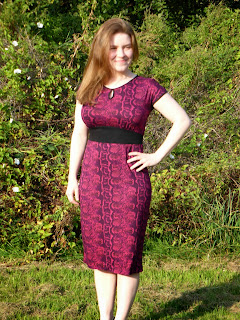