Yesterday, my copy of "To Die For - Is Fashion Wearing Out The World?" By Lucy Siegle arrived in the post. 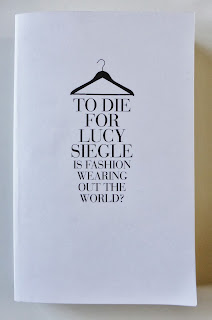 I got a voucher with it. 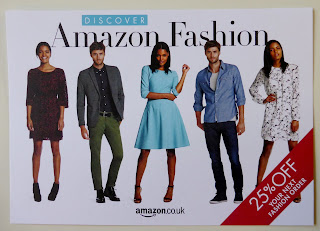 As it happens, I am a big fan of such books. Thank you Helen, for pointing me towards this one.

I proceeded to read it cover to cover, hogging the best part of the sofa, and stopping only for tea and comfort breaks. 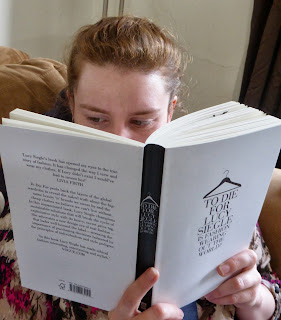 There's nothing particularly new here for me - I read a lot of non-fiction, and have already worked my way through other consumer-culture commentaries including 'Affluenza' by Oliver James, 'Affluenza' by John De Graaf, and 'Affluenza' by Clive Hamilton. You might spot a theme. I've also gotten through 'Excess' by Kim Humphrey (which provided a new perspective for me), 'Not Buying It' by Judith Levine, 'Growth Fetish' also by Clive Hamilton and  pretty much anything of that type which I could get my hands on. My ex did rather uncharitably point out that there was a degree of irony in my purchasing a bunch of books about the importance of purchasing less stuff. My compelling and well researched counter argument is essentially an Ad hominem response.

I read heaps online, watched 'The Story of Stuff' more times than I could count, and looked into groups like 'The Compact'.  So this was familiar territory in that sense. Also, some of the back story of production lines was revealed when I was doing my CIT courses, revealing far more people involved than I had ever even thought to consider. Some of the conditions of workers in the garment industry were discussed - but not with the detail in this book.

All of this reading quietly changes my understanding of the world, and my perspective shifts accordingly. On our first occasion of heading into a clothing shop together, Jon commented that he'd "...never met a woman who hates shopping as much as [I] do." And while elements of that are due to bad fit, and an instant recognition of poor quality work that I've developed with my sewing skill set, a lot of it has to do with attitudes to consumption.

It's along a similar vein to watching Supersize Me. After that, I'm not going to smell fast food and just think about how yummy that smells. I'm also going to think about obesity epidemics and crematoriums which smell just like fried chicken. Which means I'm not so hungry anymore. Similarly, knowing about the horrendous practices in the fashion industry takes the shine off stuff, real fast.

I think this book really does shed light on the scale of the unethical and dangerous practices of fast fashion. And I'll probably be going through it again, armed with post it notes and a highlighter.

But onto the focus of the blog.

In the face of all of the themes raised, it seems it's hard to make good consumer choices. The way I see it, home sewing is an excellent response to the garment industry.

Granted, all products have an impact. And I do still buy fabric, and frankly I don't know it's origins. I don't think I've even asked. Perhaps I should.

In the meantime, here are six reasons I feel better about doing my own thing.

1. Sewing for myself means I understand the value of my clothes. I hold onto them for longer, and take care of them better. I love my creations. I keep them for ages. Slowing the cycle decreases the demand for fast fashion.

2. Sewing for myself means I am not exploiting garment workers in the Developing World. I am taking my vote (albeit a tiny one) out of the economic system which presses for less than minimum wages, and unsafe working conditions in sweat shops (I can't do a great deal about fabric and fiber production).

3. Sewing for myself means I acquire clothing at a slower rate. Granted, it's always possible to out -stash your lifespan, and many of us do. But if I'm honest, even if I'm really making an effort, work commitments and social commitments and the need to sleep mean I'm flat out making more than one item per fortnight. Which funnily enough, is still far more than I actually require. Compare that to walking into Top Shop or New Look and coming home with a bag full of stuff.

4. Sewing for myself means I can convert or modify something that is 'almost' right, or needs updating, rather than throwing it out. In my experience, sometimes that's as straightforward as removing an offending embellishment. And plenty of people who don't have these skills would buy a whole new garment. I am more satisfied with my stuff because even if I make a mistake, I have the power to change it.

5. Consequently, sewing for myself means less stuff making its way to landfill in record time.

6. Sewing for myself means I don't even want a lot of the stuff I see out there - I know it isn't well made (because I know what well made means) and I know it doesn't fit well. I walk past it with confidence, rather than responding to emotional triggers advertisers exploit. That stuff is made for a fictional 'standard' figure in a carefully researched demographic. Not for me.

These are the advantages which occur to me purely in light of reading this book. I'm not including other obvious stuff like power over style choices.

What about you? Are you sewing in response to unethical fashion practices? Or purely for the fun of it? What are your best reasons for, or advantages to, sewing your own stuff?