UK hot, not Australia hot, but it seems I've adjusted. I'm always perfectly dressed for yesterday's weather - so since it has already been hot, I thought I would whip up a dress.
I liked my tank dress, but I wanted something I could wear to work and a tank dress feels just a bit too holiday - I need sleeves for work.

So I went for a t-shirt dress based on the tank dress.

I found some inexpensive fabric to play with, and got started.

I cut it out exactly the same as the tank dress, except the shoulders. The shoulder on a tank top is narrower than on a t-shirt - so you have the effect of a thick strap. So I put that extra bit (about 2cm but I think 1cm would have been ok) back on as I cut it out, using chalk to extend the cutting line from the shoulder, and then drawing the line back in with a french curve.

I also cut out a sleeve from the original t-shirt pattern.

Then I put it together as per the tank dress, and inserted the sleeves. Because the arm scythe has changed a bit with the dart, it wasn't a big surprise that the sleeve was a little loose, and I had to stretch the dress a bit to get it in. Next time I make one of these, I'm going to play with the sleeves a little bit to make them tighter. I find sleeves a little intimidating, and I can't really explain why. So I'm just jumping in and doing it. As it turned out, the sleeves were comfortably loose and I rather like them like that.

I had almost completed the dress and tried it on with a couple of different belts. Then I found this gem on my way home from work on Thursday.

And here is the completed outfit:

I'm going to have to practice smiling for the camera. :/

Just to show what a difference the belt makes, here it is without it:

I guess this just shows how much something can be dressed up or down with small details. This is important to me because I am a little detail shy  - I tend to 'play it safe' rather than experimenting with stuff, and sometimes that lets my dresses down.

But on this occasion, I feel I've done well.

I almost wore this to work today. Then I remembered that we were doing art, so I didn't. Sure enough, one of the boys managed to accidentally stab me with a whiteboard marker. He also managed to draw two stripes on his right cheek - something he was completely oblivious about. Despite my gentle suggestions that perhaps he should remove it, he remained absolutely insistent that he did not have marker on his face and did not need to wash it off. Not wearing my dress today was a pretty good call.

Update: Just clearing out my junk email. Wallis is offering this: 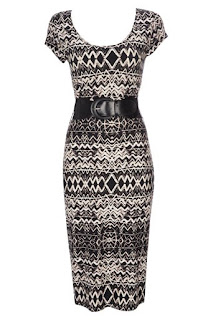 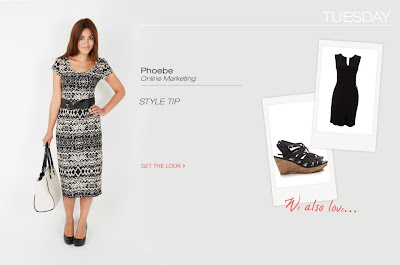 I feel like I'm a step ahead. :) Well, of the mainstream shops which isn't saying a lot...
Whateves. Mine fits.