If you have a significant height differential, you may need to alter your patterns.

Commercial patterns often have notes on the front - whether something can be modified for tall or petite sizes, and then there are lines marked on the pattern for the purpose of creating those different sizes. Thats all fine and dandy. But if, like me, you fall outside even the petite range, you need to put a lot more thought into how you go about modifying things - or even whether they can be modified.

Multi-sized patterns are drafted in one size, and then graded up or down a few sizes. Theres a limit to how far they can go, because the grading process distorts the design a little, and also because the sizes are not proportionally consistent.

There are some general guidelines that I've found helpful (generally discoveries from the Museum of Sewing Lessons Learned, or occasionally tips from experienced seamstress types when I've exhausted possibilities for myself).

One such rule I have found kind of necessary to be aware of, and then ignore, is the 'don't mess with the armscye' rule.

Allow me to elaborate.

I'm going to make this: 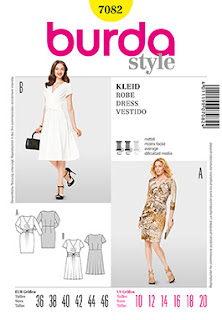 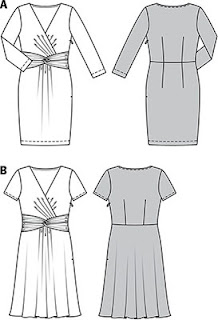 But here's what I'm going to do with this. Because I am short everywhere, I need to take length out everywhere - not just at one end. This shows up a lot in the bodice - necklines are consistently too low on me, not because I am trying to flaunt anything, but because the distance between my bust point and shoulder seam is considerably shorter than for most women. This means that a) I am likely to have a regular neckline look like a scooping neckline, and b) I am likely to find the fullness in the garment which should align with my bust sits below my bust instead. So I need to take something out between the shoulder and the bust. This act as the potential to interfere with the armscye.

The armscye should ideally be left intact. Despite being shorter than most, I still have the same thickness of arms as most (possibly a little more) and I still require the same amount of movement. Petite sizes have slightly smaller armscyes, but not as much smaller as other areas of the garment. If you do alter the armscye, your sleeve will then need to be adapted.

Here's a little visual to explain: 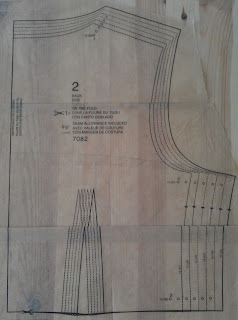 This is a basic back bodice. I compared it to my fitting blocks and decided that it was about 5.5cm too long for me. That was about 4cm too long in the lower part of the bodice, but also 1.5cm too much in the upper part - where the armscye is.

So because this is a simple pattern piece, I folded out that difference, and glued it down.

I then re-drew the parts of the line that were fractured by the fold. I am working with the size 12 here. 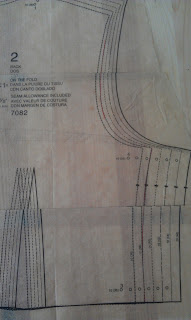 I also re-drew the dart after I took the photo.
I have then re-drawn the armscye, because I want the sleeve to fit into this shape.
To be perfectly honest, looking at this photo now I'm not entirely sure I'm happy with the new shape.

I think 5.5cm is really more of an alteration than a pattern piece can comfortably take. But because the back was simple, I might be able to make it work.

The front was a different matter. 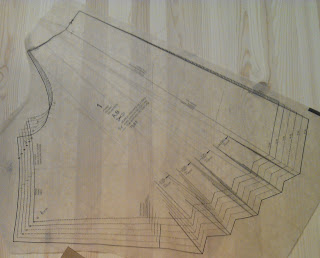 I've drawn some pencil lines here - to identify where the original pattern would have been cut and split to create the tucks at the bottom.

When I first looked at this piece I wasn't quite sure what to do about it. I couldn't just tuck it like the back because the length needed to be altered at a range of different angles.

I still wanted the width of the piece to be the same, but I needed to reduce the length.

So after some thought and procrastination, I decided to recreate the piece from scratch.

My first step was to take a good look at the way the tucks worked. So I pinned them together on the original pattern. 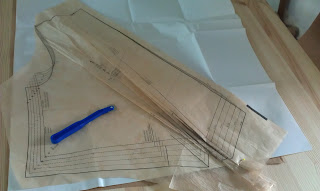 By pinning the tucks together and extending the lines from the tucks, I was able to identify that the split would come from evenly spaced points along the shoulder, and the darts which resulted (created as tucks instead) would end just below the bust point (which is fairly standard really). This came about by extending the tuck lines to find the dart points, and by extending a line through the point of the dart to the shoulder.

Once I had folded the piece, I traced it onto paper as a basic front shape. 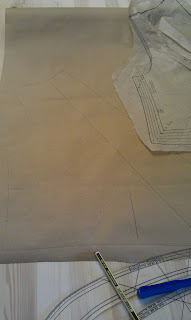 I could then shorten the basic front in the same way as I shortened the back - taking 4cm out below the armscye, and 1.5cm in the armscye. 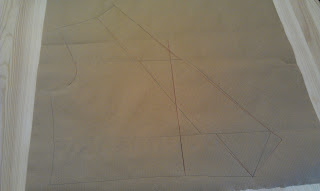 I redrew the lines of the shortened piece.

I then needed to put those tucks back in.
So I measured and spilt the pattern to follow the same shape as the original. 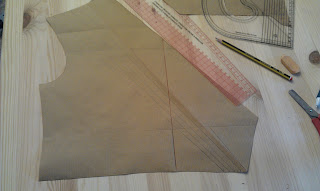 First, I drew in the lines for the split. 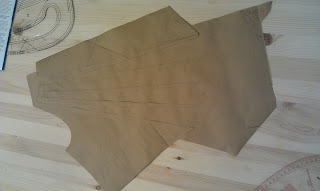 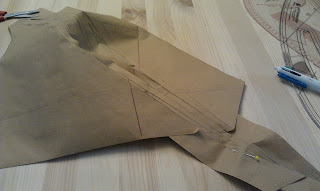 I pinned this in place to check that they were all aligned properly. 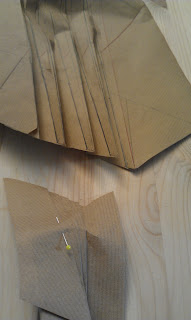 And then trimmed off the excess in line with the bottom edge. 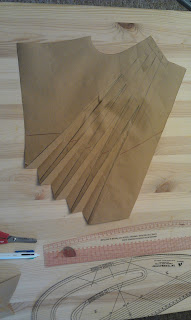 A quick run over with the iron.... 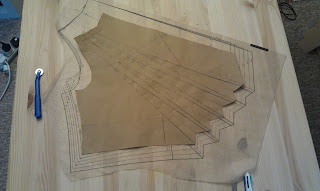 And we can see how my pattern stacks up next to the original.
I did then remeber to fix the armscye.

So then I went ahead and made up the pattern. Here is the result: