A good tank is a useful wardrobe staple, isn't it?

After some thought, and examination of garments in my wardrobe, I have decided I would like to put a bust dart into my tank top.

So I have been thinking about darts.

I think about darts and stuff like that a lot. While other people are fantasizing about meeting movie stars or something, I am lying awake thinking about darts. Sometimes, I even sit at the table after dinner playing with little scraps of paper trying to figure out how to modify patterns, or create them. 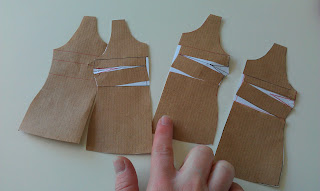 Friday night is party night at my place.

So this weekend, I had a did a bit of a 'study' on this bust dart. And I came up with a technique which worked for me.

I started with my basic flat front. This is the basic t-shirt front. To make it a tank top you will want to bring the shoulder line in, and the neckline out for a more 'tank' style, but I'm going to explain that later on. 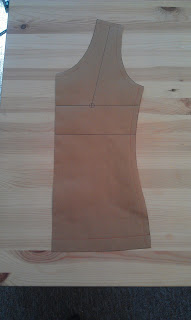 I marked the position of the bust line, bust point and underbust on the pattern piece.  Too often a full bust modification means the fabric is added but for the full length, creating a matronly bag-style. I didn't want to ignore the need for the fabric to come back in again!

I cut through these lines, and I also split above the bust line, from the bust point to the mid point on the shoulder. I included all seam lines. 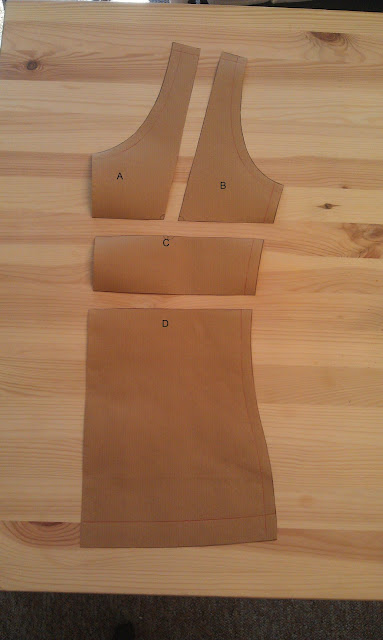 For convenience I will refer to pieces as A,B,C and D. 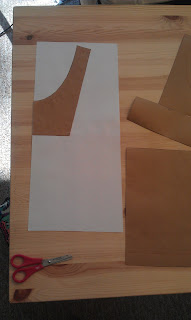 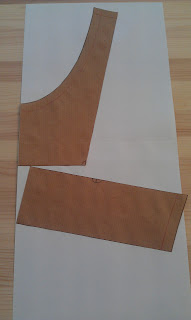 This angle created an opening to form my dart.

I glued piece D underneath C, in such a way that the end seam line of piece C, touched the cutting line of piece D. This will need to be smoothed out, but should mean the fabric comes back in underneath the bust rather than just hanging. 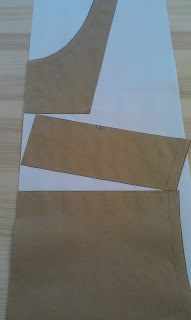 I glued piece B such that the top corner touched the corner of A, but swung out the same 1.5cm away from A at the bottom corner. This piece forms the bottom of the dart at the outer edge. 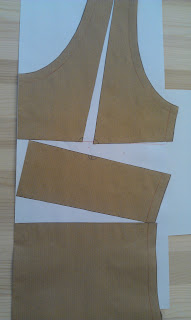 To mark the dart, the dart shouldn't  extend to the middle or to the bust point, and the angle needs to be drawn in so that it will peak a reasonable space away from the bust point. I bisected the angle from where I believe the new bust point would be, and put a mark where I would like the new dart to end.
I then drew in the dart. 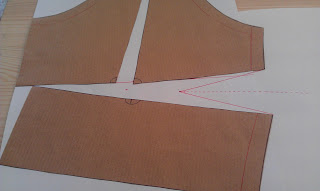 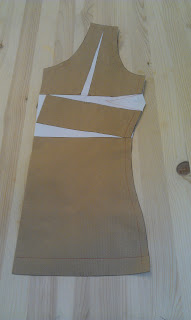 This method worked immediately for Maria's tank. When I made mine I found a slight gap at the armhole. And I can be a perfectionist, so that wouldn't do. To eliminate the gape, I slashed the piece from the armhole to just below the neckline, and I closed the gap there - sliding the pattern piece to align with the centre line so that the neckline is unchanged. I then corrected the centre line. 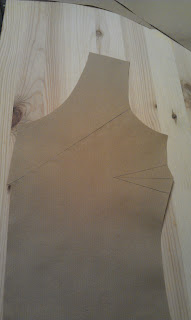 To make the t-shirt style into a tank style, I lowered the neckline and brought the shoulder line in 1.5cm (on front and back pieces). This is because since the straps on a tank are narrower than the shoulder of a t-shirt. My shoulders are quite narrow and I like a thick strap to cover my bra straps. You could easily bring the side of the shoulder in about 3cm (1 1/4") and the neckline out about the same.