The Spotty Dress - A before and after story.

I like trying to turn ugly dresses into dresses that fit really well.

I like it most when someone gives me an ugly dress for free. When someone drops something in my hands and says "Yours if you want it," I am free of all scissor-fright. The same goes for when I get a piece of fabric I didn't buy. When I bought it I struggle with all of the thoughts that go with it - how much it cost, what I bought it for, that I don't want to stuff it up... etc.

When someone hands me something I am free of those thoughts. Instead I just think 'what can I make from this?' (For this reason, I think fabric swaps are a great idea.) 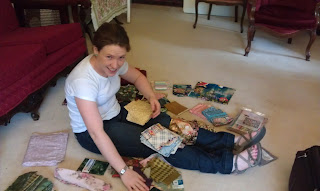 So, some time back, I was handed a spotty dress. Here it is! 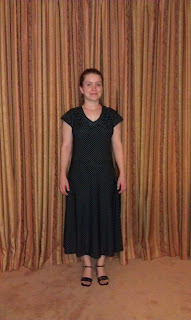 Whoa, does that ever fail to do my figure justice!


Even with heels to help out, this dress is sexy like a garbage bag.

It does have a belt, and I did leave it off for this photo. In part, this was because the waist fell so low on my body, the belt would have sat a good 5 cm above the seam it was intended to cover.


But this dress does have some good stuff going for it. The neckline sits well, and I really like it.

So - where to begin?

I decided that I wanted to raise the waistline. So that was step one. After that, I wanted to bring the side seams in, so that it fits snug around the waist. I could do this because the fabric is very stretchy, so I wouldn't need a zip to get in or out. I prefer minimal ease where possible, because too much swamps me. Stretch fabric is brilliant.

I marked my new waistline by tying elastic around my waist, and creating a chalk line. I then trimmed 1cm below (for a 1cm seam allowance), and removed the strip from the skirt. 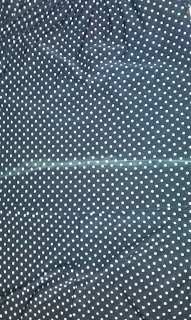 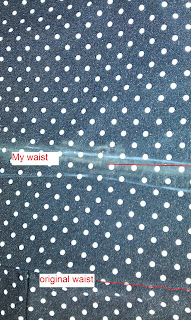 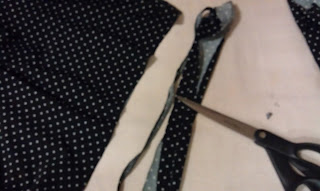 I sewed the new waistlines together.

Once I had that sorted, I tried on the dress again. With a little help, I pinned the sides from under the arm to the waistline on both sides. Then I took the dress off, drew down the skirt to blend the new waist with the existing line. This meant re-drawing the line for most of the way. I then evened up the sides, and sewed down both sides to create the new seams. 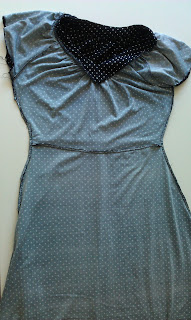 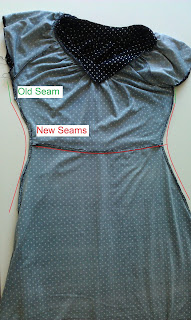 When I tried it on again, I discovered two problems. The first was that there was a distortion at the centre back seam. Who would have thought that a cheap dress would have wobbly seams? I unpicked that, straightened it up and re-sewed it. 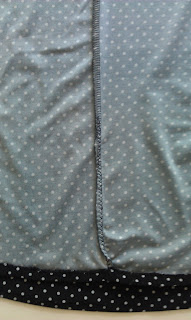 The second problem was that lifting the waist had caused un-evenness in the hem, which was to be expected. With some help (read - my mum) I marked a new hemline. I then sewed the hem by hand. 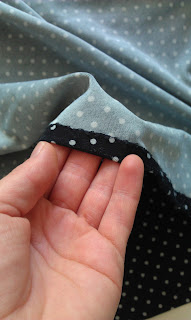 This is the final result. 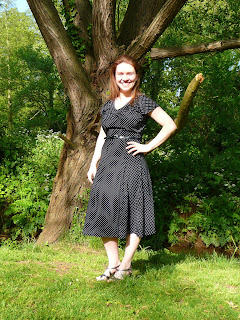 I get checked out wearing this. ;)